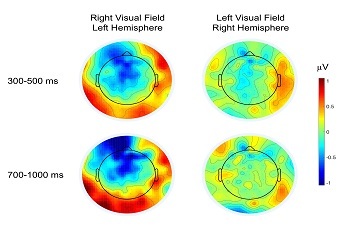 The brain processing of metaphors elicits an electrophysiological abstraction effect, states Bálint Forgács researcher of the Department of Cognitive Psychology and ELTE Babylab, member of Social Minds Research Group, in his article at e-neuro, journal of Society for Neuroscience.

Abstract
Neuroimaging studies show that metaphors activate sensorimotor areas. These findings were interpreted as metaphors contributing to conceptual thought by mapping concrete, somatosensory information onto abstract ideas. But is sensorimotor information a necessary constituent of figurative meaning? The present study employed event-related potentials (ERPs) in a divided visual field paradigm with healthy adults to explore the role of sensorimotor feature processing in the comprehension of novel metaphors via the electrophysiological concreteness effect. Participants read French, novel adjective-noun expressions that were either metaphorical (“fat sentence”) or literal (“fat hip”). While literal expressions evoked a typical concreteness effect, an enhanced frontal negativity during right hemisphere (RH) as opposed to left hemisphere (LH) presentation, metaphors showed no such sign of sensorimotor feature processing. Relative to literals, they evoked a sustained frontal negativity during LH presentation and similar amplitudes during RH presentation, but both of these effects were the greater the more abstract the metaphors were. It is the first time such an electrophysiological abstractness effect is reported, just the opposite of a concreteness effect. It is particularly noteworthy that ERPs evoked by metaphors were not contingent on figurativeness, novelty, meaningfulness, imageability, emotional valence, or arousal, only on abstractness. When compared with similarly novel literal expressions, metaphors did not evoke a typical N400 and did not activate the RH either. The findings shed new light on the neurocognitive machinery of figurative meaning construction, pervasive in everyday communication. Contrary to embodied cognition, the conceptual system might be organized around abstract representations and not sensorimotor information, even for lush, metaphorical language.

The full article is available here>>>