In the Footsteps of Modern Addictions 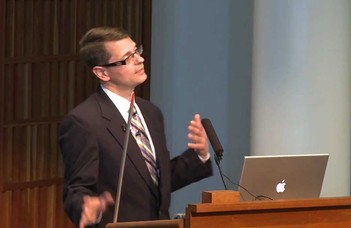 Dr Marc N. Potenza, professor of psychiatry and addictions, feels at home in many fields of science. Nowadays, he is mainly researching various addictions and addictive behaviour. On the occasion of awarding him the title of Honorary Doctor and Professor of Eötvös Loránd University, we asked him about his current researches on addictions.

You learned molecular biochemistry and biophysics. Besides, you have a general medical degree and a diploma in psychiatry. Why did you choose addictive behaviors within psychiatry for the main field of your studies?

During my studies, I realized that addictions have a tremendous impact on individuals, their families and society in general. It is estimated that the public health impact of addictions is as great as, or greater than, the impact of other major medical conditions. Trying to improve the manners in which people get into treatment, receive treatment and experience more effective treatment has been a driving force.

As you mentioned, I have had training in molecular biophysics and biochemistry and then in cell biology. I was doing molecular neuroscience research and entered a medical scientist training program which permitted me to concurrently obtain a medical degree and a PhD in cell biology. After that, I entered a neuroscience residency training program at Yale University that permitted me some time to do research. During that time, I had planned to spend research time doing benchtop research investigating the molecular mechanisms of addictions, but I also became exposed to clinical research involving people, particularly those with impulsive and compulsive disorders. By the time I went back to benchtop research, I had missed the clinical focus of the research and directly being involved with people in a research capacity, and I thought it would be best for me to focus my efforts on training in clinical research. At that point, I began to study behavioral addictions, with an initial focus on gambling disorder.

Nowadays when we hear the word addiction, most of us think of being addicted to different substances like alcohol, nicotine or other drugs. Your research shows that addiction can affect other areas as well, such as sexual behavior, gambling etc. How can people broaden this view on addictions?

Many people do focus on addictions as involving substances such as drugs like opioids or stimulants (like cocaine), tobacco or alcohol. However, the word “addiction” is derived from a Latin word meaning “bound to” or “enslaved by”, and in its original formulation, it was not linked to patterns of substance use. Several hundred years ago it became related to excessive and interfering patterns of alcohol use and then to excessive and interfering patterns of drug use. By the mid-1980s, many experts studying addictions mainly believed addiction was defined by compulsive drug use. However, in the 1990s, scientists proposed some core elements of addictions that included continued engagement despite adverse consequences, compulsive engagement, craving and diminished control over engagement in the behavior, in which case non-substance-related conditions like gambling disorder may be considered as addictions.

In the early part of this millennium, there have been multiple studies that have examined similarities and differences across substance addictions and proposed behavioral addictions like those involving gambling, gaming, and sexual behaviors. As data were gathered, we could see that on a clinical and impact level there are many similarities. In the DSM-5, gambling disorder was reclassified together with substance use disorders as a “substance-related and addictive disorder”.

My involvement in that process was to compare gambling disorder with substance use disorders and with obsessive-compulsive disorder and to look for similarities and differences across several domains, such as epidemiological, clinical, co-occurring disorders, phenomenological, genetic, neurobiological, prevention, treatment and other domains. By reviewing those differences and similarities in a systematic fashion, this provided a rationale for the reclassification.

You were one of the founding members of the Journal of Behavioral Addictions (2011.) Today it is a leading professional journal. Why did you join this initiative?

I thought this was a very important initiative as the field was lacking a journal that was dedicated to the study and research of behavioral addictions. Prof. Demetrovics, the founding editor and current editor-in-chief of the journal, invited me, and I thought it was an exciting and important opportunity. He has done an outstanding job with managing the journal as editor-in-chief. Nowadays, it is a leading journal with a high impact factor, being consistently rated as a Q1 journal, which is a testimony to his hard work, vision, insight, decision-making and oversight of the journal.

What are your current research topics?

We have a number of studies that focus on behavioral and substance addictions. For example, we research how parenting might be impacted by addictions, particularly with a focus on how addictions may affect the interaction of mothers with their children and how we might influence maternal caregiving with interventions in mothers engaging in addictive behaviors. In another line of research, we are integrating brain imaging measures into randomized clinical trials for individuals with addictions so that we can understand brain mechanisms underlying recovery, as well as those that may link to proposed mechanisms of actions of the therapies, so that we may ultimately improve treatment efforts. We are also working with the World Health Organization in annual international meetings to understand the impact of gambling, gaming and other addictive behaviors and forms of digital technology use. This work also involves developing instruments that may help to identify and diagnose individuals with these conditions across cultures. We believe that these efforts could have a significant public health impact across the globe.

How did you start to collaborate with ELTE Faculty of Education and Psychology?

I become an editorial board member of the Journal of Behavioral Addictions, and I also attended the 1st International Conference on Behavioral Addictions that Prof. Zsolt Demetrovics and his group of talented researchers organized. Given our shared interests, we began to work together, for example, in the World Health Organization workgroup. We work together in ongoing studies, some of which are being conducted in Hungary, led by Professor Demetrovics. I believe that the work he is leading is very important in identifying features of problems that people may be experiencing today in the changing digital technology environment.

How did it affect you to have received the title of Honorary Doctor and Professor of Eötvös Loránd University?

It is an honor, and I am very grateful for receiving this title. I hope that it will help to maintain an ongoing relationship with the University and with the Faculty so that we can work together to improve public health in the area of addictive behaviors, particularly behavioral addictions like those to gambling and gaming as well as to other behaviors that have been proposed as being potentially addictive like pornography viewing.