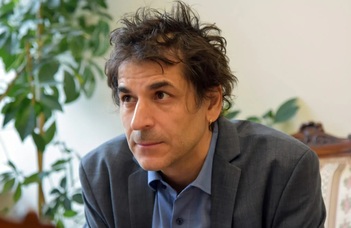 On May 3, 2022, the General Assembly of the Hungarian Academy of Sciences elected professor Zsolt Demetrovics as a correspondent member.

Professor Zsolt Demetrovics was born in 1971 in Budapest. He obtained his MA degrees in psychology and cultural anthropology at ELTE Eötvös Loránd University, Budapest, Hungary in 1998, and in 2006 he received his PhD in clinical and health psychology (addictive behaviours) from the same university. He earned the title of Doctor of Sciences (DSc) from the Hungarian Academy of Sciences in 2014.

During the years 2011-2021, he served as Director of the Institute of Psychology at the ELTE Eötvös Loránd University, where he established the Department of Clinical Psychology & Addiction. Additionally, he served as Dean of the Faculty of Education and Psychology between 2014-2021 and he was appointed Head of the Doctoral School of Psychology between 2016-2021. In 2021, Professor Zsolt Demetrovics was appointed as Chair of the Centre of Excellence in Responsible Gaming; a newly established research institute at the University of Gibraltar that aims to study the etiological factors of addictive disorders and contribute to their effective prevention and treatment.

Throughout his career, his research focused predominately on understanding addictive behaviours. Initially, he studied substance use related issues and part of his early research focused on the characteristics of Hungarian drug use patterns and the spread of new psychoactive substances. In the past two decades however, reflecting on the rise in problematic internet use and addiction, his research has focused more on video game use and consequently, video game addiction and other non-substance-related problems, including gambling, exercise addiction, compulsive buying, work addiction and compulsive sexual behaviour disorder. A key feature of his domestic and international role includes behavioural addictions in regular and comparative studies of the field.

Professor Demetrovics is the founding Editor-in-Chief of the Journal of Behavioural Addictions , established in 2011, and the President of the International Society for the Study of Behavioural Addictions , established in 2016. He has authored and co-authored more than 600 publications  (impact factor: 934; total number of citations: 19,400; h-index: 74).

In addition to his outstanding and well-recognized research work, Professor Zsolt Demetrovics is a highly influential and much-respected lecturer who has supervised 20 PhD students. He has had an immense influence on the professional work and advancement of his contemporaries and young researchers. With his exceptional work and diverse, unpretentious leadership style, he has played a remarkably positive role in shaping the world of psychology as we know it today.